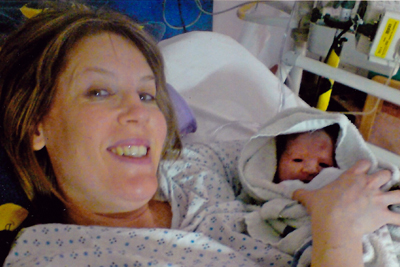 My HypnoBirthing™ story starts with a stranger. Oh, how much I owe that stranger. She had overheard me ask a friend if they knew of any self-hypnosis books or cds for childbirth, which they didn’t, and so an hour or so later when we got up to leave, the stranger bravely approached me to say that she had undertaken a HypnoBirthing™ course and had found it very useful. To think there may have been the chance that I’d never have heard of HypnoBirthing™ frightens me. But hear of it I did and find it incredibly effective I did.

attended my first HypnoBirthing™ class with more than just a pinch of scepticism. The claims I’d read of HypnoBirthing™ enabling a labour without pain, of women having calm, serene births, seemed so far fetched and at complete odds with everything I’d heard about labour (which to be honest boiled down to what I’d seen on TV and in films and heard from friends recounting the, generally traumatic, experiences of friends of friends!) I thought it all sounded highly improbable. BUT, incase there was a grain of truth in it, I thought it was worth a chance.

I left the first class a complete convert! 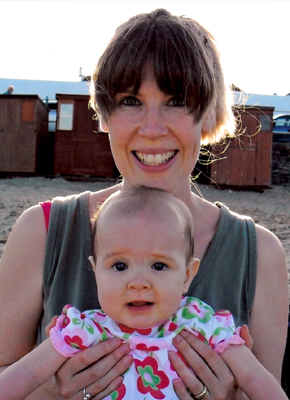 My daughter arrived four weeks early, only two weeks from the end of my HypnoBirthing™ course! My hind waters had broken several days before and due to a risk of infection I needed to be induced, so was hooked up to a syntocinon drip in the hospital. My plan of a waterbirth at home was out the window, but I was still calm and happy and incredibly excited to meet my baby.

In antenatal classes you are taught that syntocinon goes hand-in-hand with an epidural or pethadine, as it makes each contraction stronger and more frequent, but using all the techniques I had learnt in my HypnoBirthing™ classes I needed NO PAIN RELIEF!

I’m not saying that I was completely numb and felt nothing or that I was calmly sipping tea and playing chess, but what I can honestly say is that I was able to manage the sensations and mute them to simply discomfort. I went into the hospital saying that if I wanted pain relief I was going to have it, there was no reason to be a martyr, BUT I DIDN’T NEED IT!

At 9cm, however, the baby’s heart rate began to drop with each contraction and it became obvious that a C-section was needed. Because the whole birthing had been taken out of the natural, my body wasn’t given the time between contractions to shift the cord and it was getting squashed with each surge.

I remained calm and relaxed and was happy for this new set of events, as the safety of the baby was paramount.

Now, a C-section is major surgery, they are cutting through some very major muscle layers, but despite this I was up and walking around the very next day, infact less than 12 hours after the birth, which I have been told by those in the medical profession is unheard of. I believe this is also thanks to HypnoBirthing™. I believe that because my muscles had been totally relaxed when they were cut and had continued to receive a full and constant supply of oxygen throughout labour, they healed alot quicker and caused me little trouble.

After my amazing birth experience I couldn’t stop myself from extolling the virtues of HypnoBirthing™ to everyone that I came into contact with. Then at last, when my friends could take no more, it was suggested that perhaps I should train as a HypnoBirthing™ Practitioner and extol the virtues to people that actually wanted to hear! And so that is exactly what I did. And I’ve never looked back.